The FAZA are here! Their deadly motherships are deploying Drones, hunting humans down, and changing the land into something… terrible!

Join Faction Zeta and save your city in this dynamic cooperative game. Move across the board with action cards, leverage special abilities and dice to combat enemy Drones, and recruit Faza Rebels to join the cause.

Will you succeed in destroying their three motherships, or is our city doomed and all hope lost?! 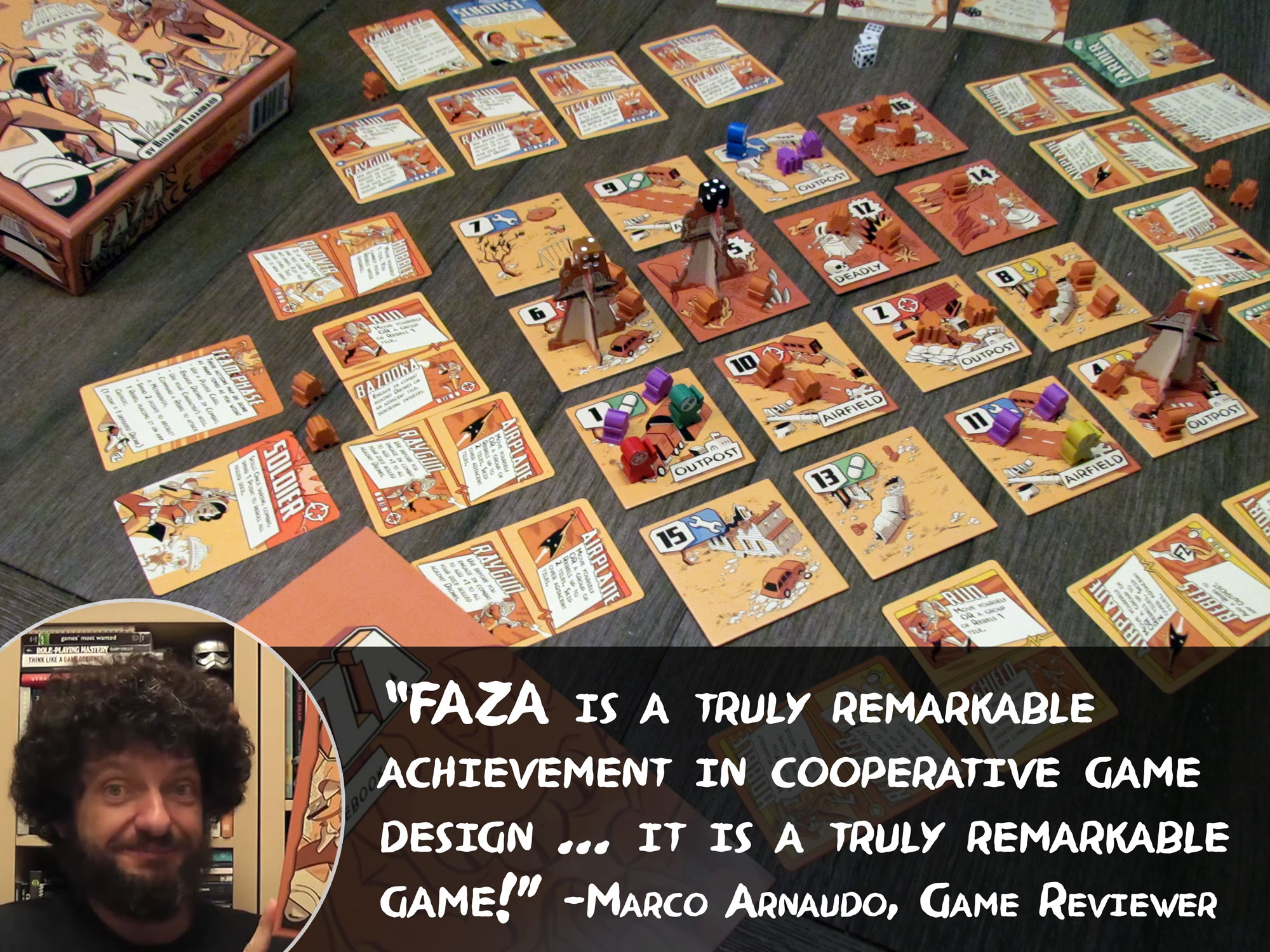 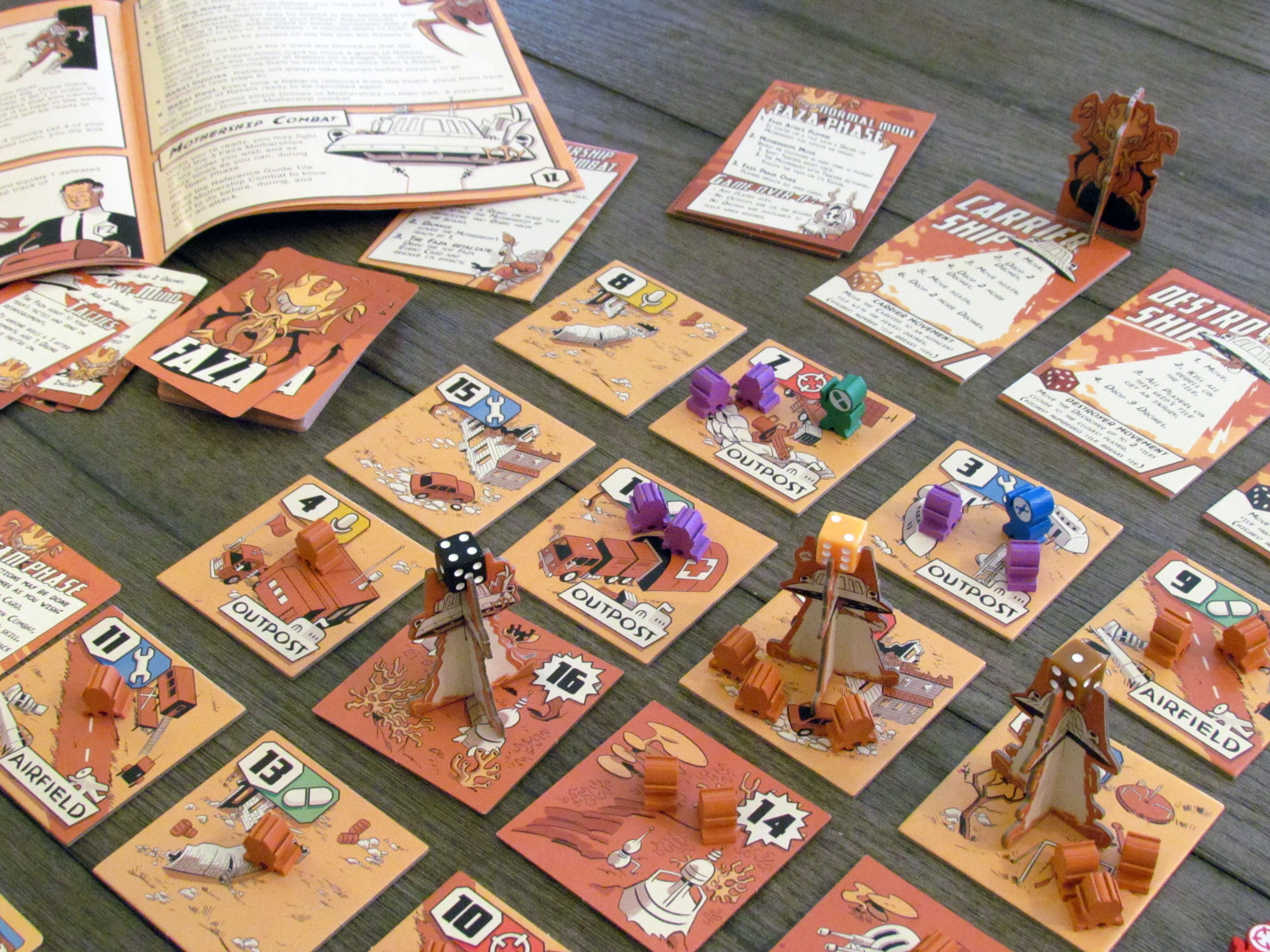 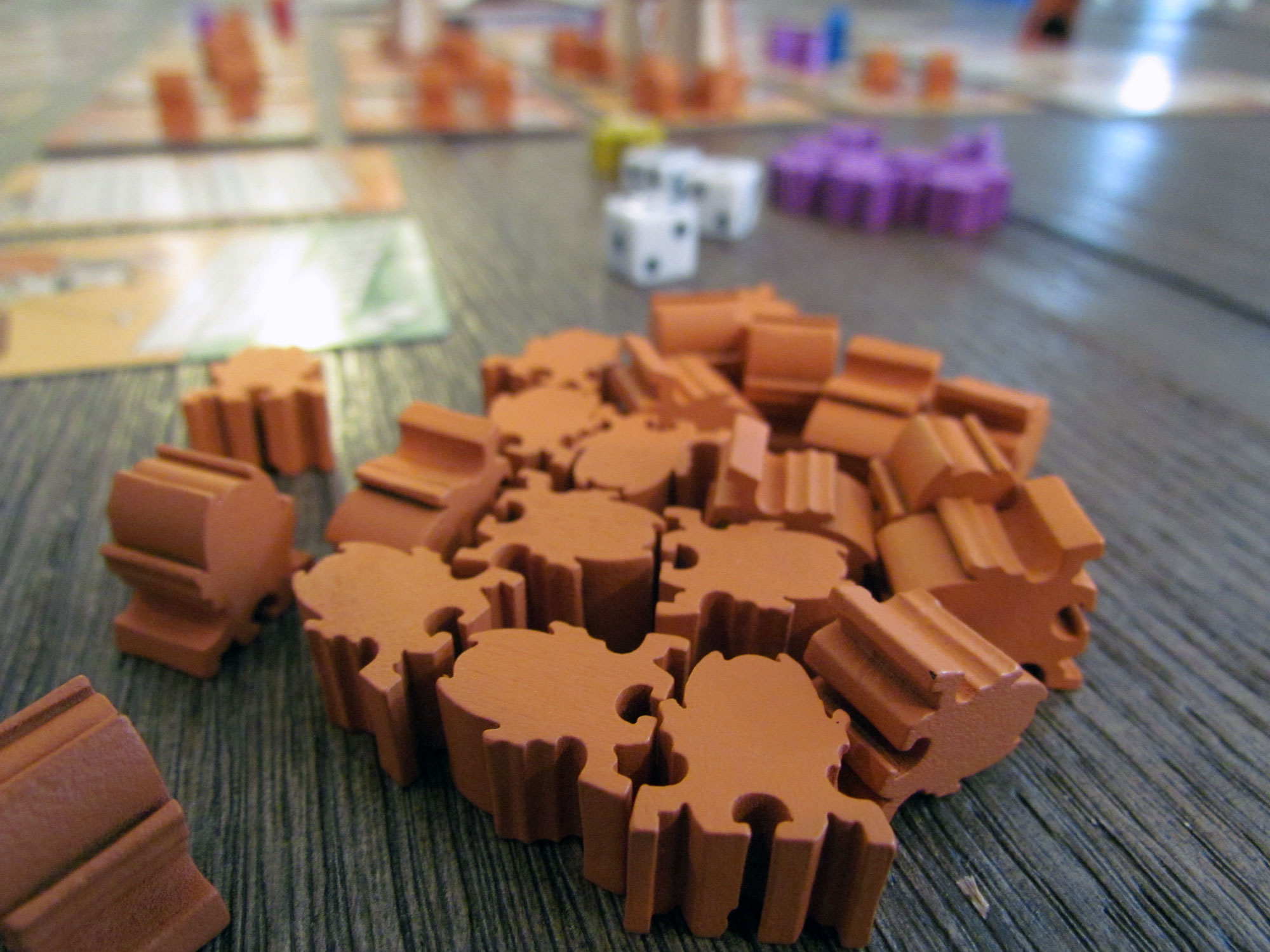 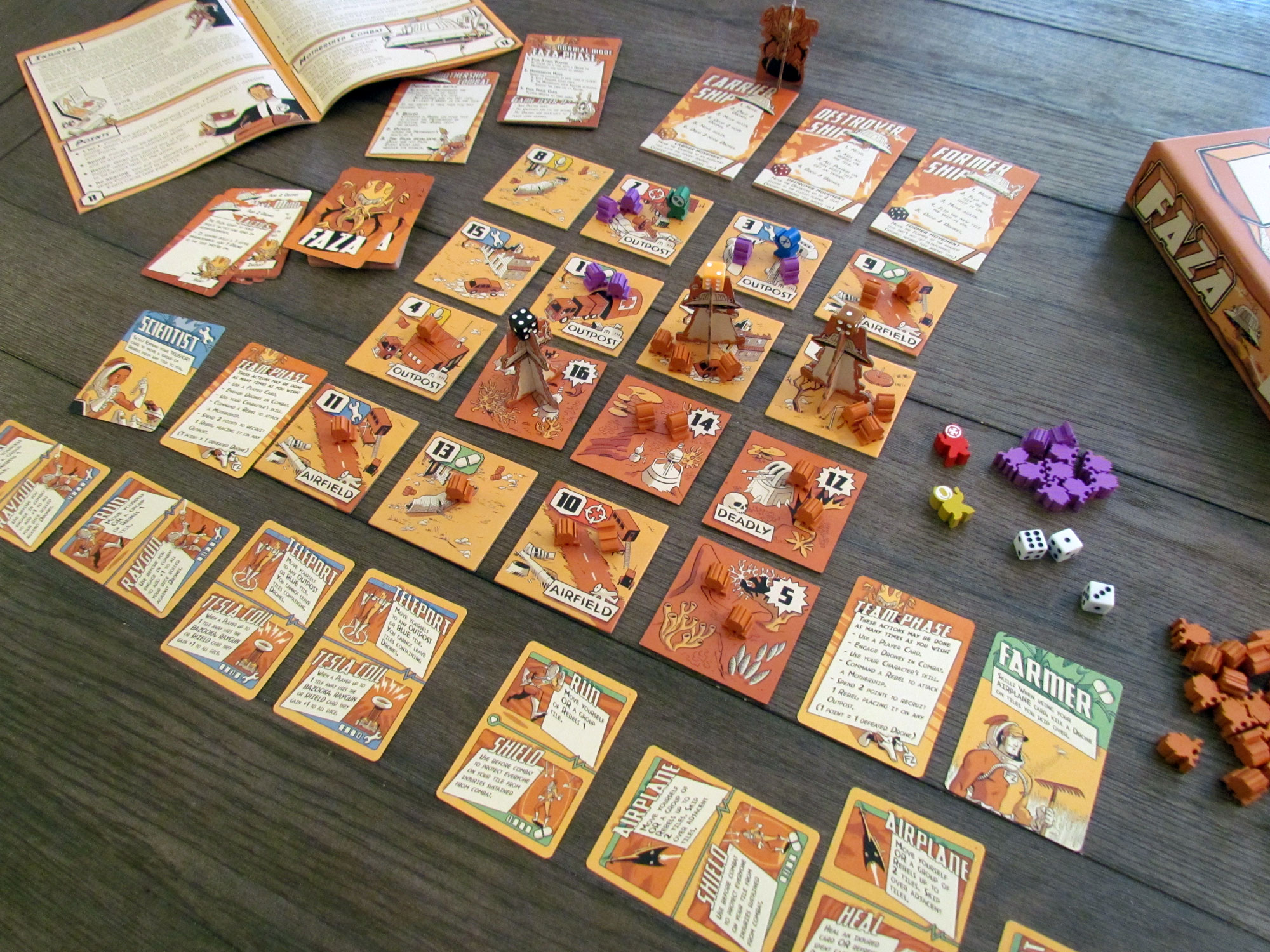 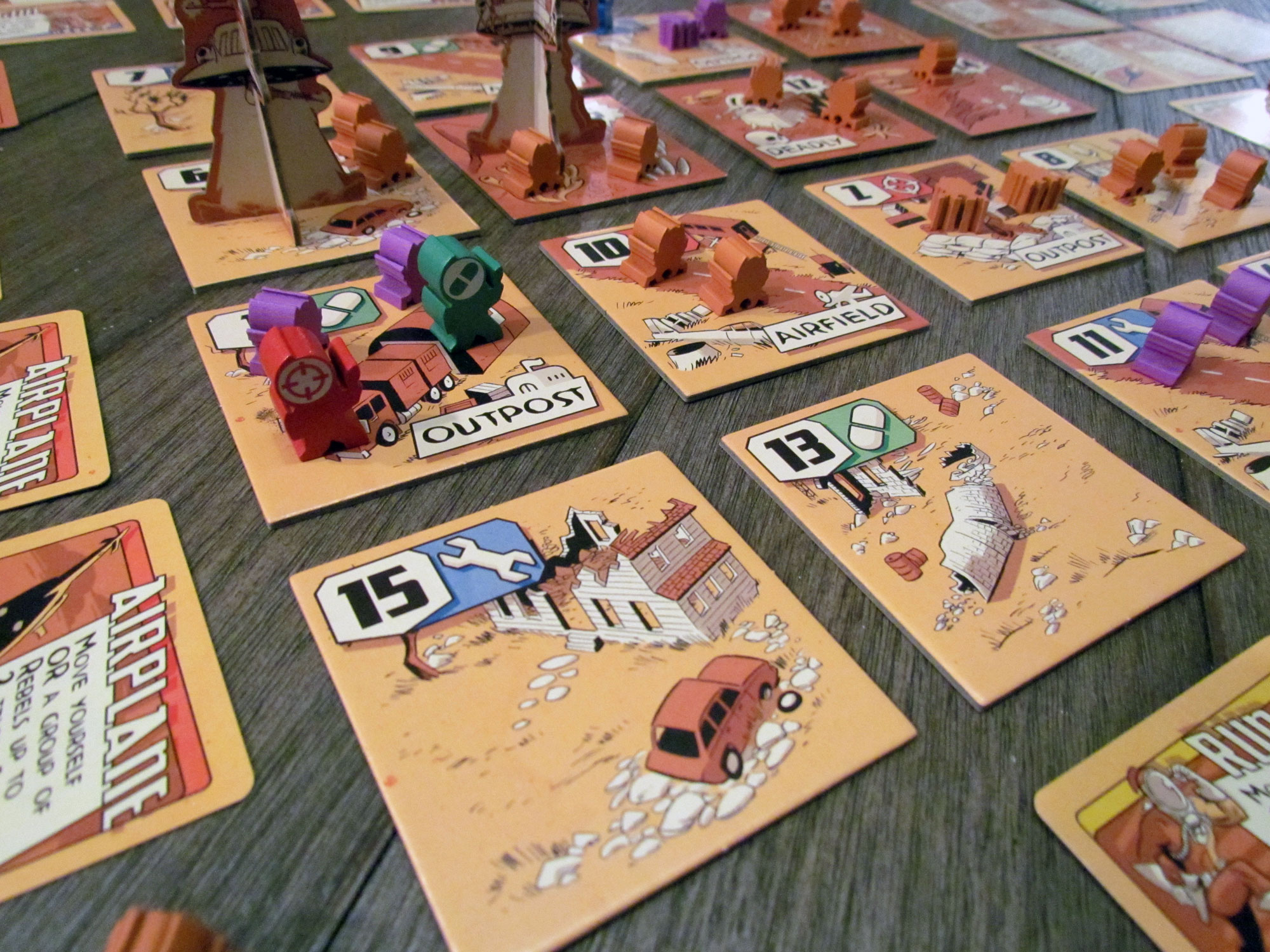 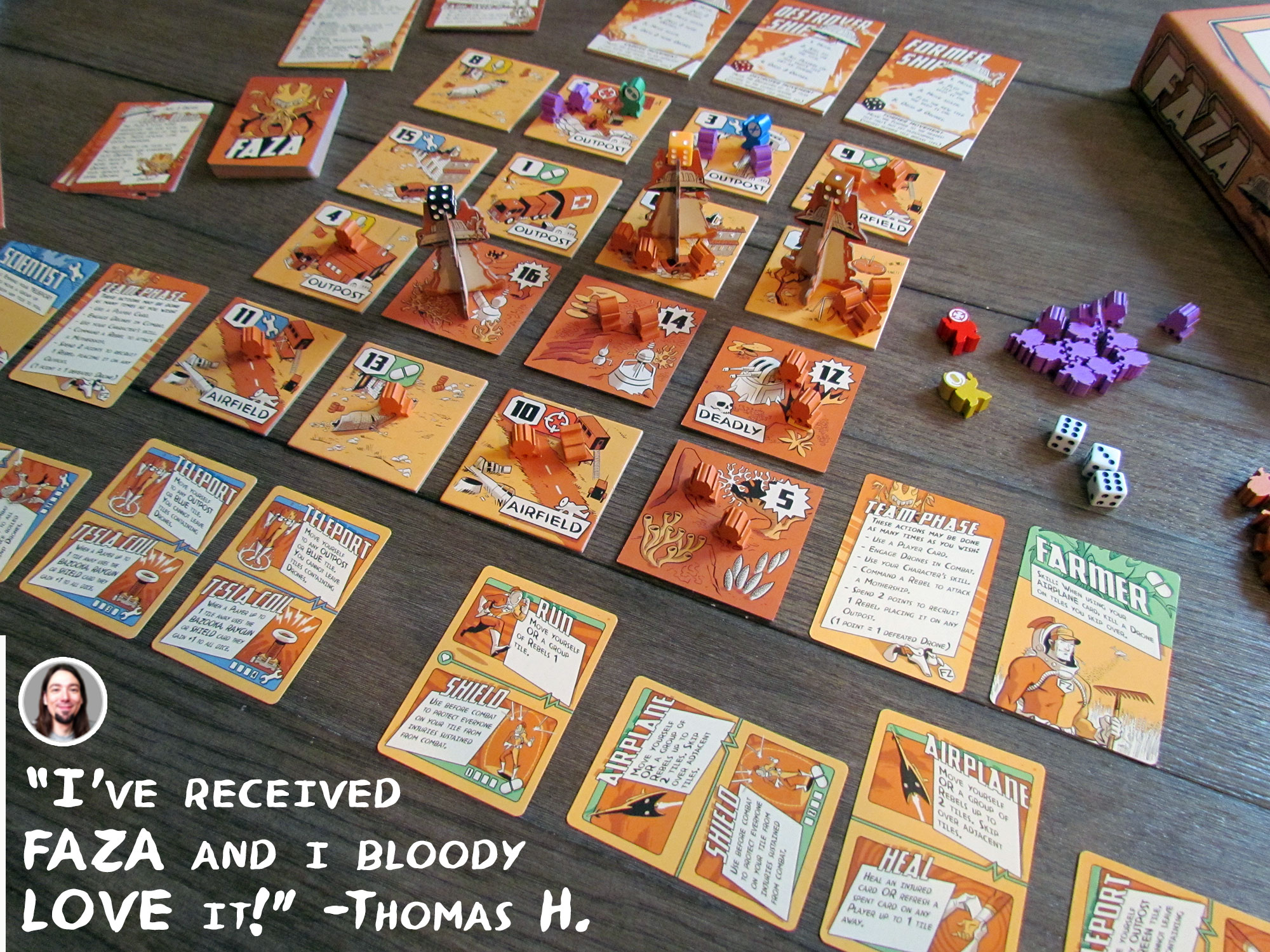 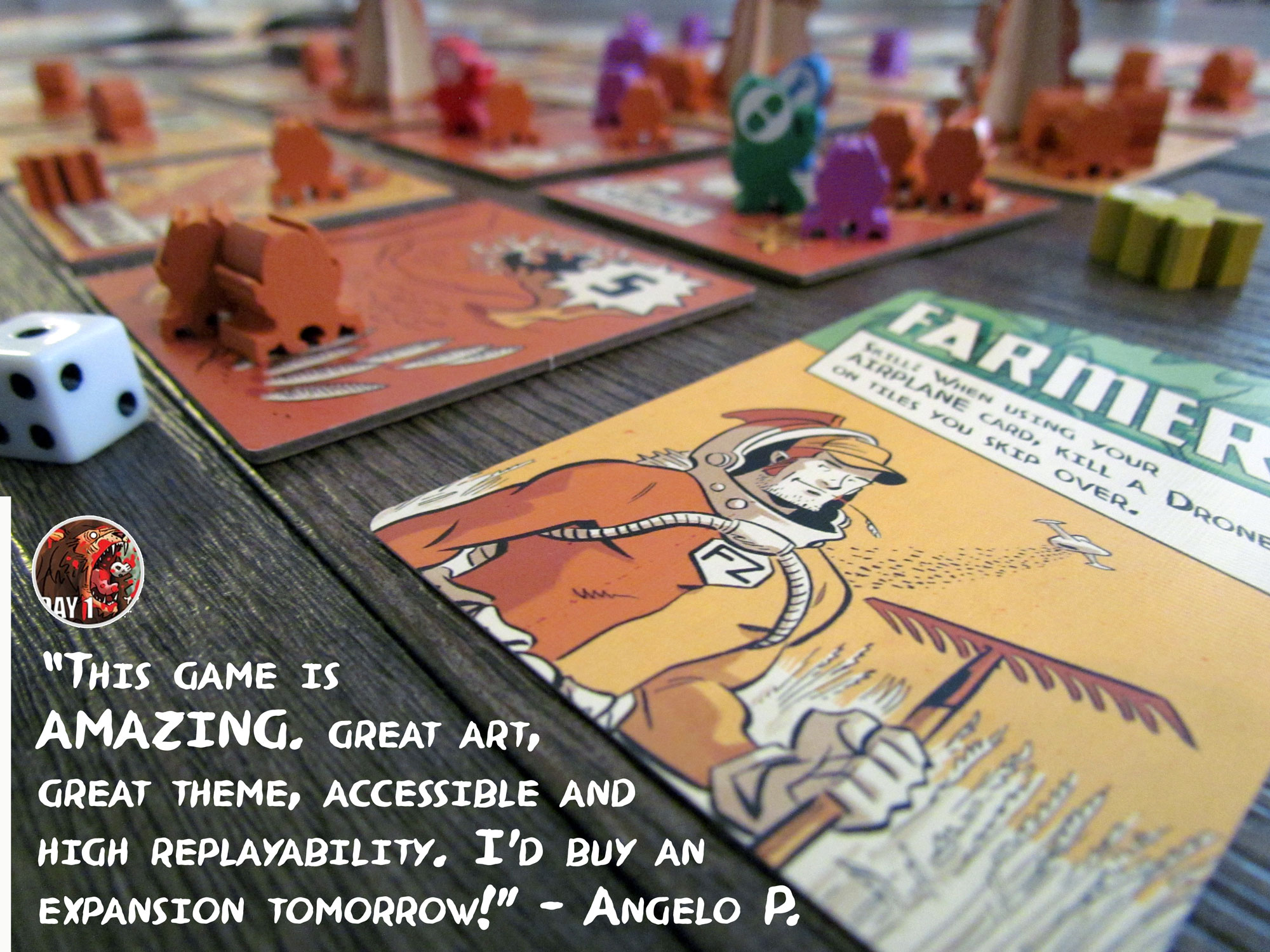 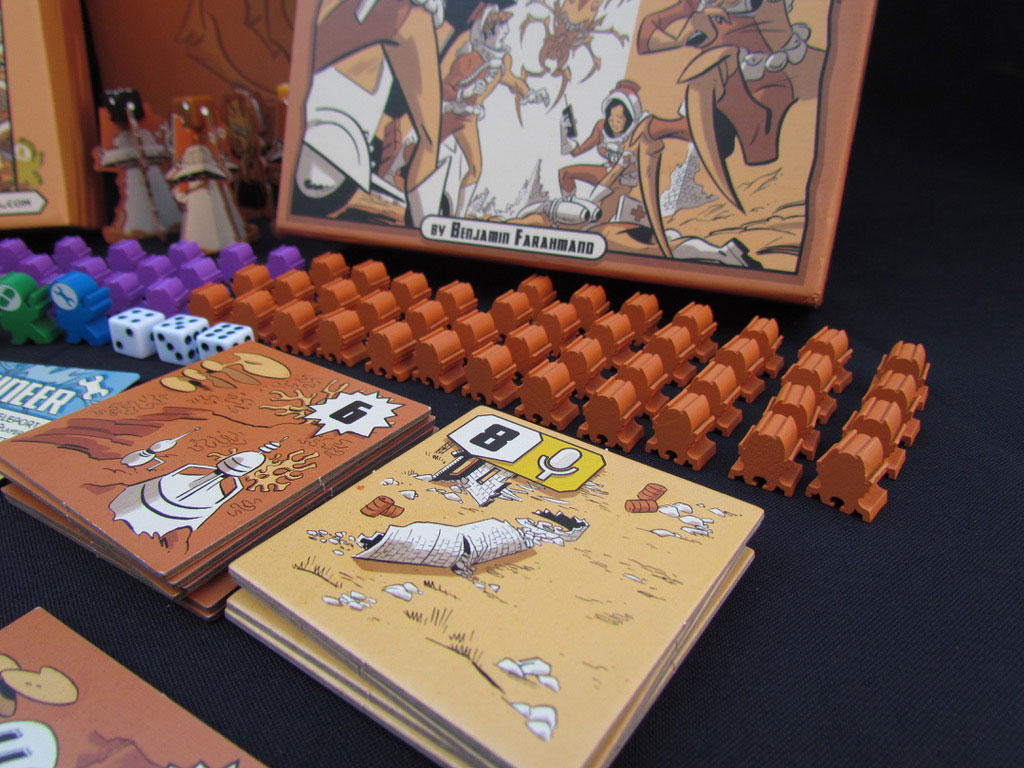 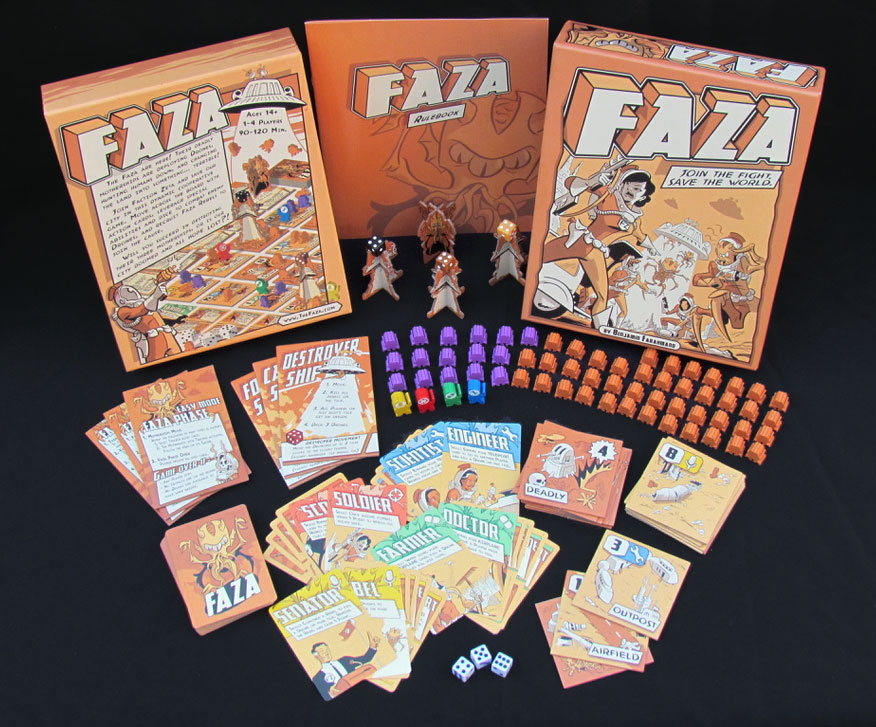 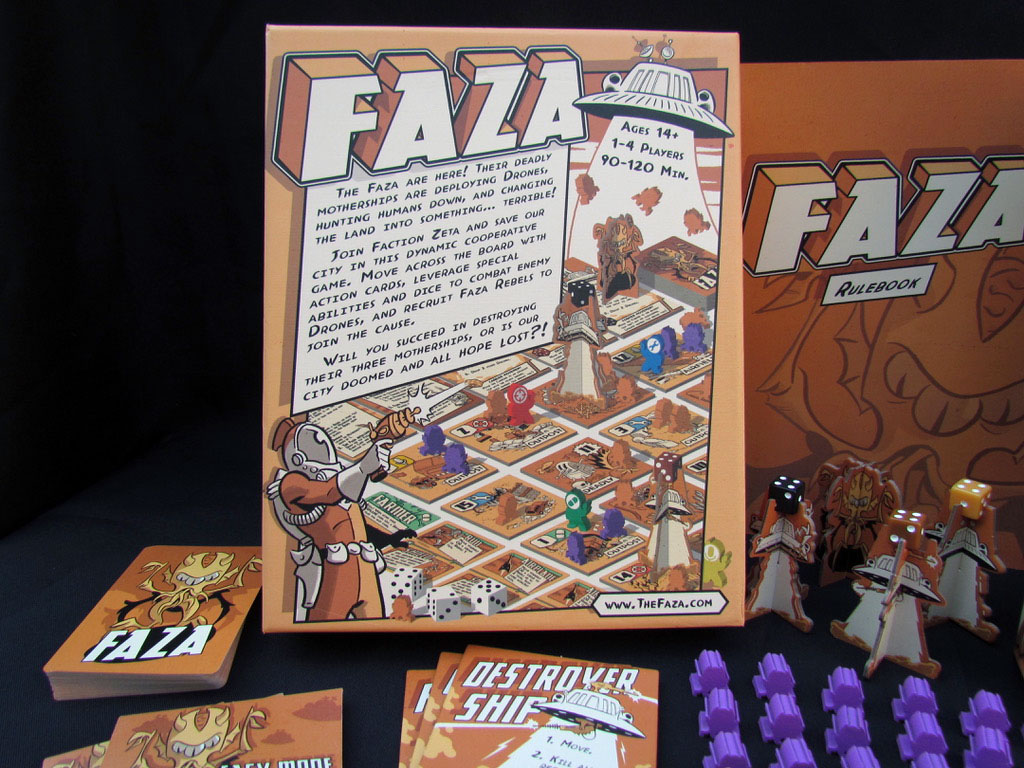 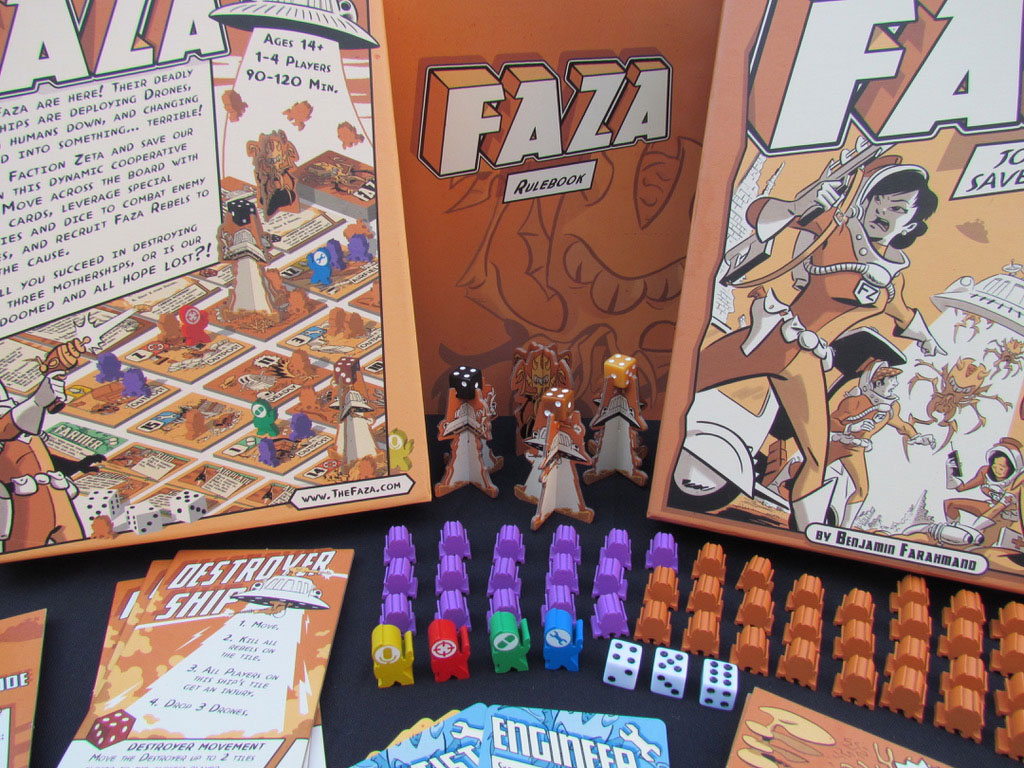 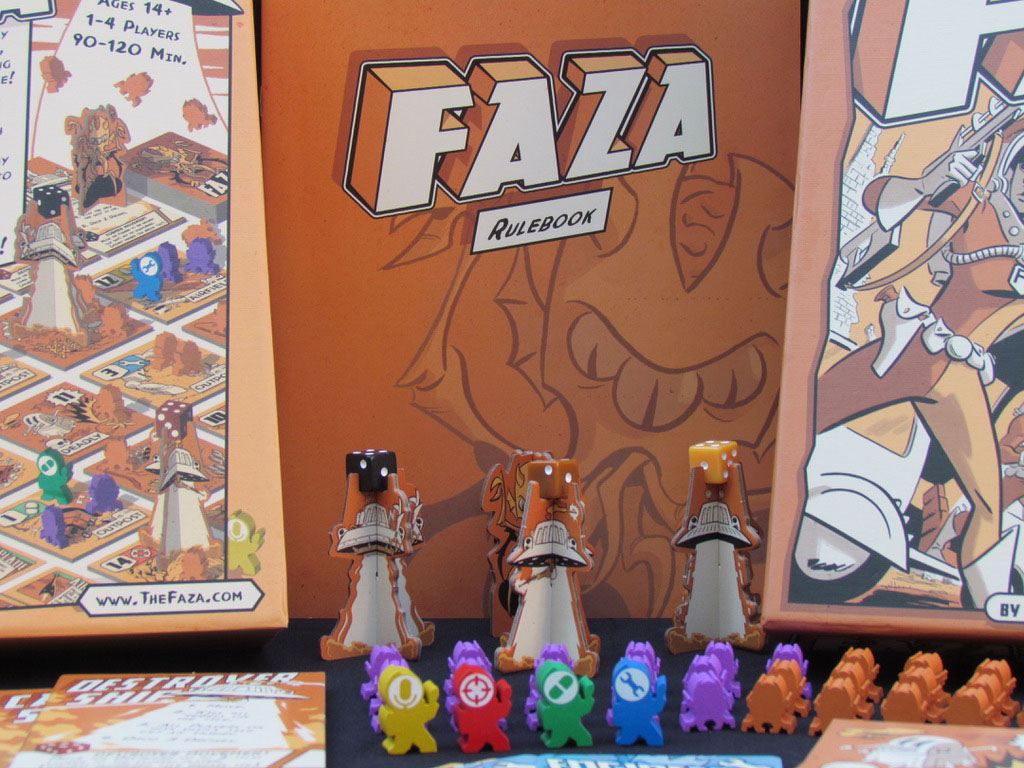 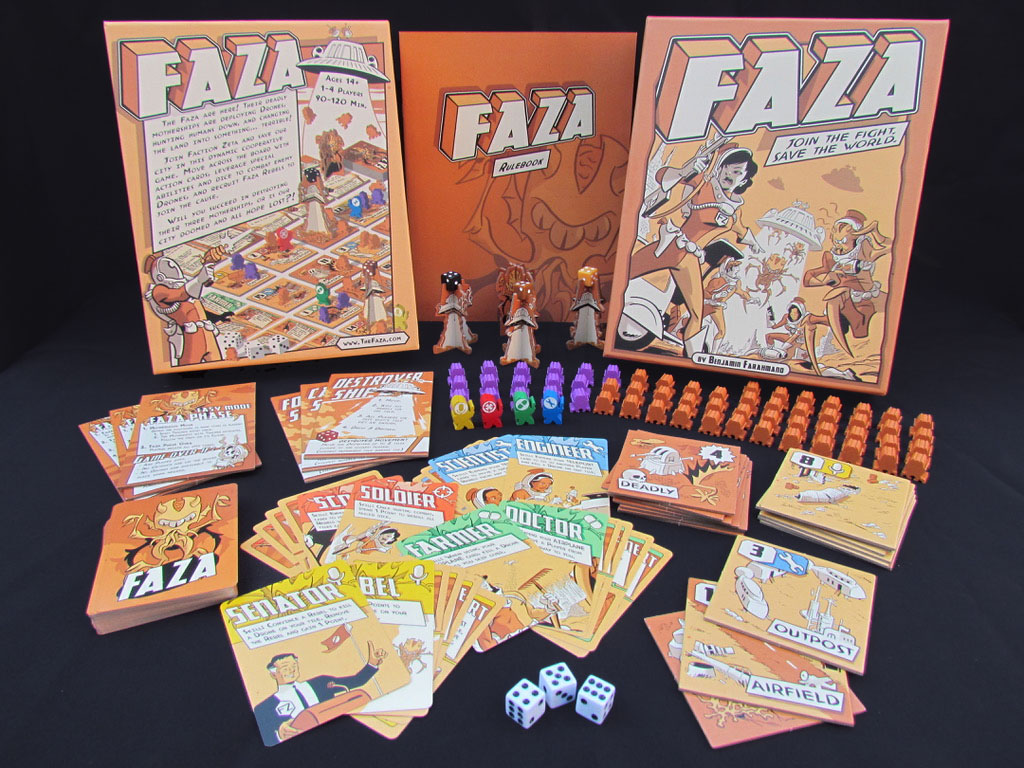 “It’s a game of almost endless variety. Again, I’m so excited. I’m so enthusiastic because I haven’t played a game with such flexible, yet intuitive, yet straightforward gameplay in quite a while.

FAZA is a truly remarkable achievement in cooperative game design.

Do give it a try, it is a truly remarkable game!”

“I really like and enjoy Faza. I liked it when I got to play a small demo at UnPub 8 and I enjoyed it even more when I had it on my table. If you like cooperative games, Faza includes some interesting takes on the genre … I would consider Faza to be a touch more intricate than contemporaries Pandemic and Flash Point: Fire Rescue.”

– Kurt Miller from Two off the Top

“This game is not easy and it ratchets up in tension quickly … It reminds me of Forbidden Island and Forbidden Desert, but it has a relentless nature to it – kind of like playing Eldritch Horror. And it is a tense game. But somehow the ‘Mars Attacks’ theme that’s put on top of it keeps it kind of buoyant, keeps it kind of fun.”

“FAZA, it reminds me a lot of Pandemic … makes me think of Mars Attacks … it’s fun, I really like it … the artwork and theme of the game make it more approachable than Pandemic … I really like the theme.”

– Ric White and Ryan Gutowski of One Board Family

“If you’re a fan of cooperatives you owe it to yourself to give FAZA a shot.”

“It’s an excellent cooperative game that manages to keep all the players engaged at once with its simultaneous play.”

“My gaming group and I agree- Faza is the best co-op game we’ve ever played.”

– Alex Coulombe, Judge for the Big Box Challenge on The Game Crafter