Designing, developing, and refining FAZA was a process that involved making many mistakes, slowly noticing them, and then making thousands of small design decisions – eventually accumulating into a cohesive experience that I can finally say is fun. This is the one constant in designing any product, service, or experience: making mistakes. We as designers make a lot of them.  It’s only through testing prototypes that we discover mistakes and have the opportunity to fix them.

FAZA originally began as a quasi-tower defense game that mashed together a few different game mechanics I enjoyed. The players controlled heroes that would be responsible for saving and defending their camp from the onslaught of FAZA drones, dropped off from motherships. 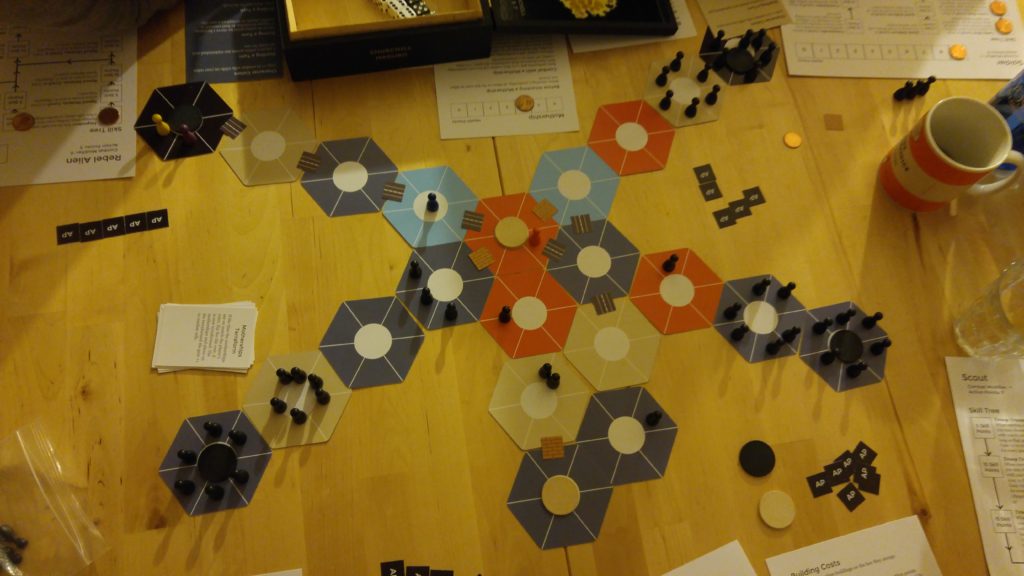 FAZA also incorporated a way to add more tiles to the board as the game unfolded. The prototype was somewhat playable, but I discovered problems with pace due to  board management. Game play was slowed because players had to move too many FAZA pieces while also navigating the board with their avatars. 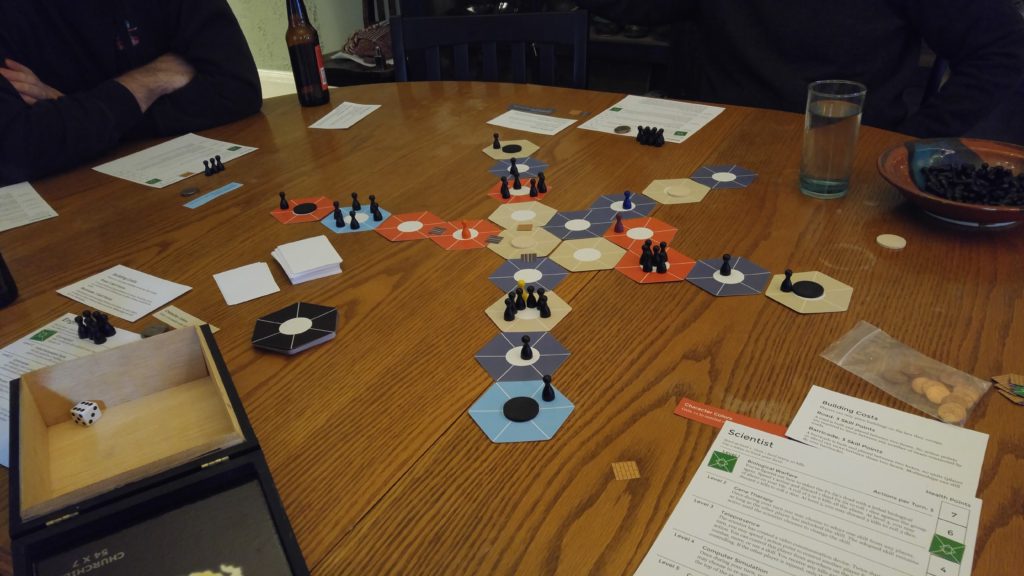 Since FAZA is a cooperative game, the players are responsible for managing the foe they’re playing against. The challenge was to reduce the amount of pieces that players had to move around the board, while ensuring the game was challenging. From another perspective, I was also looking to free up more time for players to have dialogue with each other so they could focus on making interesting decisions as a group. The more time they spent managing the board the less time they could engage the core of the game.

At this point, my time was spent playtesting to identify rules I could cut, which was followed by more playtesting to make sure the game was still playable. Cut, playtest, tweak, playtest – it was grueling and required a lot of dedication to get past this hump. The persistence slowly began to manifest, it helped me discover the core of the game. This took me roughly a year to get through. 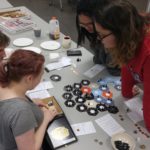 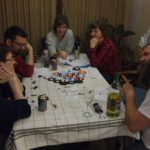 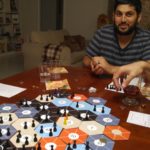 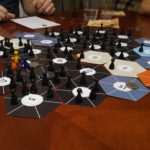 By cutting away the game mechanics that were too time consuming and less enjoyable the foundation for the game was now set. It was time to invest in the graphical work and illustrations. 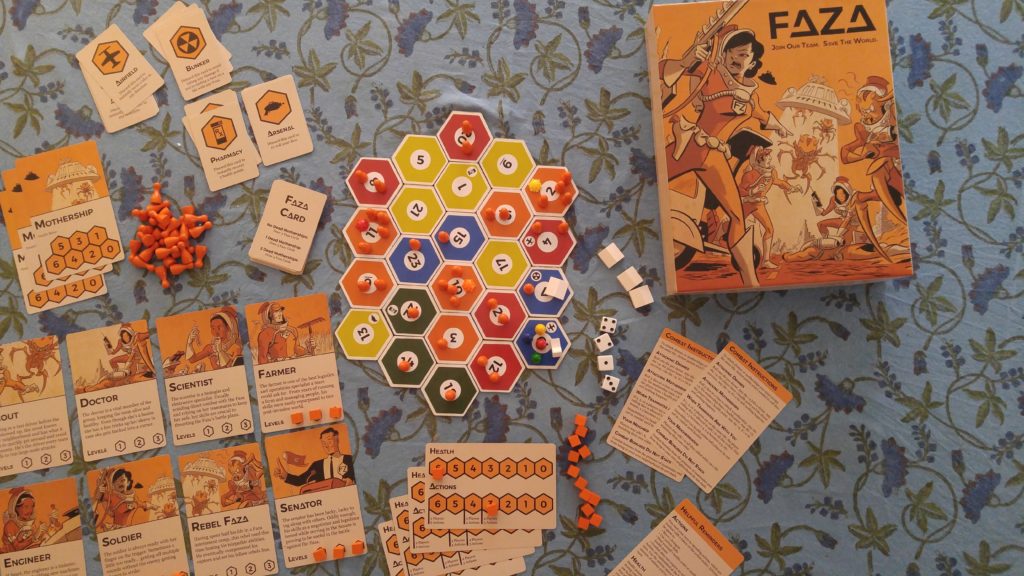 Another major step in the design process involved working with an illustrator and solidifying the aesthetic, lore, and backstory to the game. This went a long way to make the game look and feel complete, drawing people in to sit down and play. But it wasn’t enough; the game mechanics were still rough around the edges, the choices presented to players were bland, and the user interface still needed a lot of work. 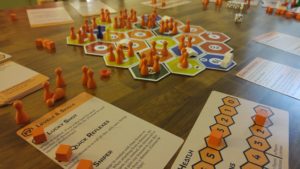 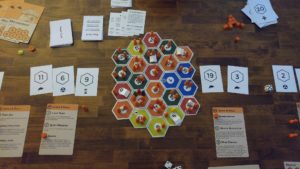 The next big step in the design process was accounting for the different choices players were making to battle and defeat the FAZA. I wanted to ensure each decision presented players with trade-offs. If a player chooses A, then they have to give up B. To promote dialogue, I also worked towards a design that forced players to make tough choices while strategizing as a group. These are the kinds of choices tacticians have to make, and this added tension to every player’s experience.

The cards in front of them functioned as their user interface, presenting them with all their options and choices, scaffolding their decision making process. Thinking through and mapping out the available choices for players was the next big hurdle in the game design process. It informed the design of the Player Cards, which are now core to playing FAZA. 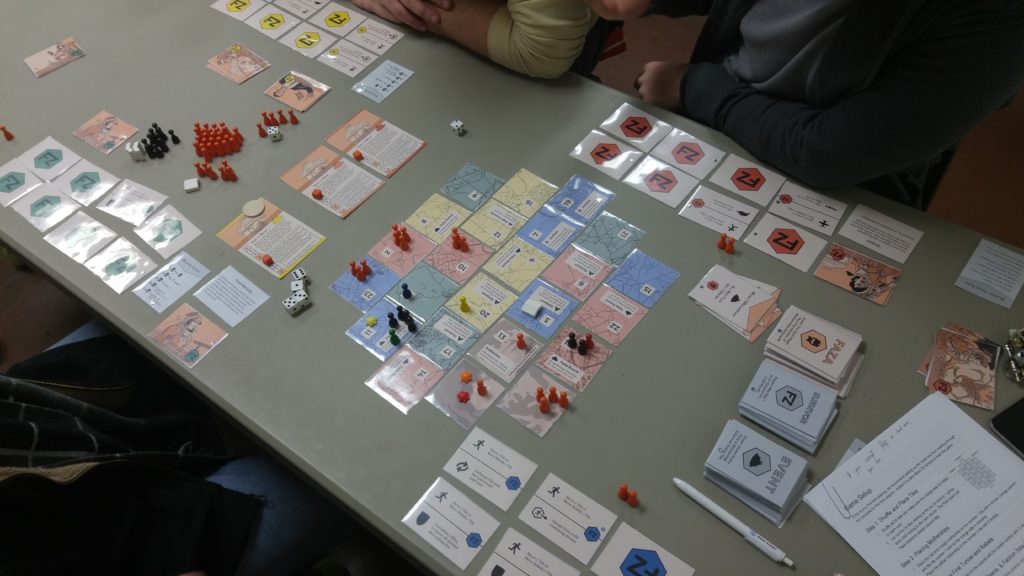 Just as important as the other aspects of the design process is visually communicating to players the options they have in front of them. All interfaces have a learning process and carefully observing people struggle to learn the game, noting what they find confusing, and adding visual cues and text reminders went a long way to scaffold their learning process. 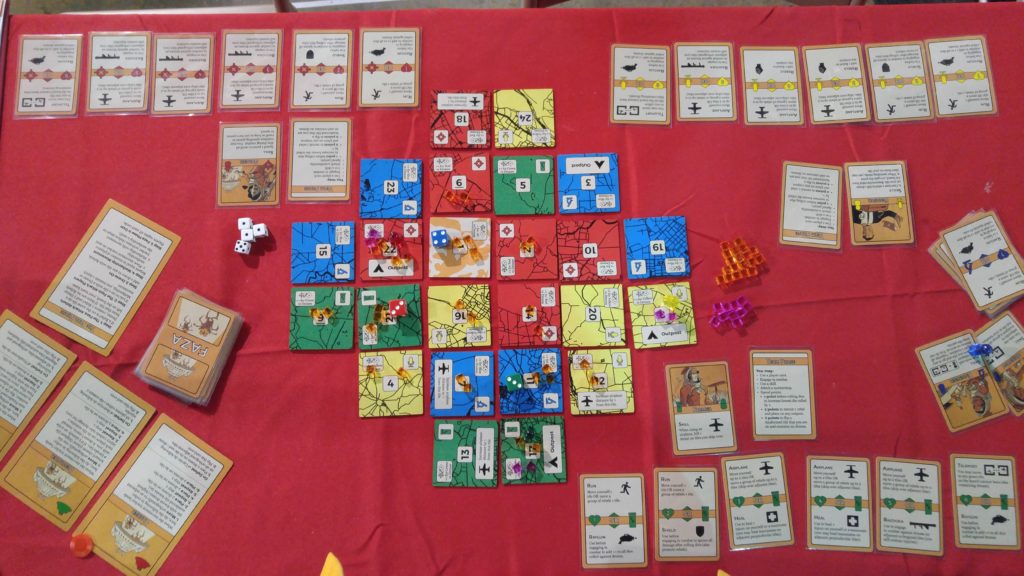 FAZA is not for everyone. The level of strategic thinking, tactical coordination, and cooperative dialogue demanded of players can be a turn off for some people. There have been many times where I’m two minutes into explaining how to play the game and I can see a player’s eyes glaze over. Before people sit down to playtest FAZA, I repeat multiple times we can stop playing the game and they can leave at any time. I think giving players the option to get up and leave ensures I don’t waste their time and they don’t waste mine. Since it’s a 90 minute time investment, I want FAZA to be a fun and enjoyable experience. Discovering FAZA’s audience then involved having conversations with everyone that played the game, learning about what other kinds of games they’re into, other hobbies and activities they engage in, and what drew them to FAZA. 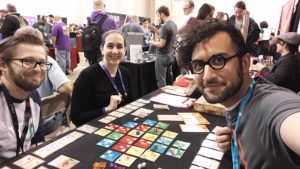 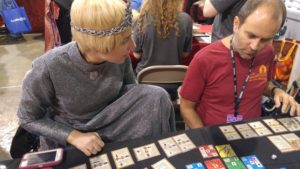 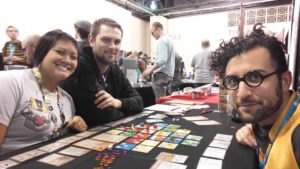 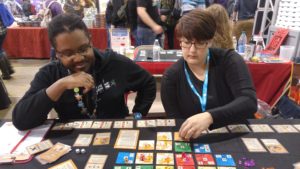 Another vital step in the game design process is facilitating user testing sessions to extract actionable insights. For me, it involved observing people while remaining detached as they struggle to learn to play the game. I would then ask a few prepared questions post-playtest.

While I’ve been designing games only for the past two years, I’ve been doing user experience research and design for about 7 years. One particular strategy I employed from my professional work to get the most out of playtesting is using the think-aloud protocol. As the name implies, think-aloud protocol asks players to verbalize what they’re looking at, what they’re thinking through, and the decisions they want to make. Occasionally, I would interject to probe with a few ‘why’ questions to better understand their thought process and experience. While this particular strategy can quickly reveal many issues, it will greatly increase the play time and you probably won’t get through an entire game. It also requires you to not play your game and instead sit quietly on the sidelines, take notes, and do your best to deflect any questions back to players in order to see if they can find the answer they’re looking for.

I would argue playtesting is the most important aspect of the design process and also the most time intensive. To speed up that process, I started reaching out to local board game stores and  accidentally came in contact with a local board game design group called the Game Makers Guild of Philadelphia. They’re game designers who get together twice a month to playtest each others board games and give each other feedback.

If it were not for the continued playtesting and feedback from friends, family, and the Game Makers Guild of Philadelphia, I don’t think I would have been able to bring FAZA to where it is today.

If you have any questions or comments or want me to write another post going into further detail about any of the points I outlined above, leave a comment below.

3 thoughts on “Designing for Fun”