Some really cool news I’d like to share with you all. I was inducted into The Game Crafter’s Hall of Fame because a few months ago FAZA won the Big Box Challenge. While there’s still a ton of work left to do for FAZA, I’m feeling excited to reach this milestone and also honored to have the game design work I’ve been doing be recognized by the game community. 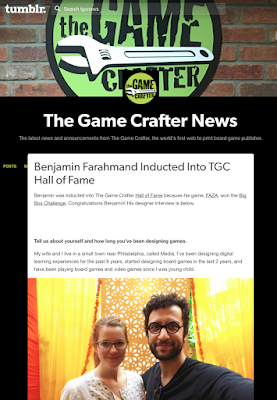 The interview questions range from ‘how long have you been designing games’ to ‘where the game idea come from’ to ‘any words of encouragement or advice to all the designers reading this’ and everything in between. Check it out and let me know what you think.

So this is some really great news, FAZA won the Big Box Challenge on The Game Crafter! 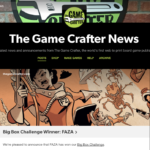 Alex Coulombe, the judge for the competition, played FAZA with his gaming group multiple times. Check out his detailed document outlining what they loved about FAZA.

He described FAZA as “far and away the most polished and engaging, while also offering the most value on repeat playthroughs, especially across 2, 3, and 4 players.” After playing the game multiple times, they “realized there was no ‘sure-fire’ strategy, and the game forced us to adapt and improvise to changing situations.” He went on to say that “FAZA is the best co-op game we’ve ever played.”

If you get further into the document, he continues listing out the many wonderful aspects of playing FAZA:

The Big Box Challenge started out with 55 board game submissions, and then the list was whittled down to 20 via a community voting process. Now, the list of games has been further refined to 7, and FAZA is one of them! You can read more about the seven finalists here and also see the scoring sheet provided by the judge Alex Coulombe. 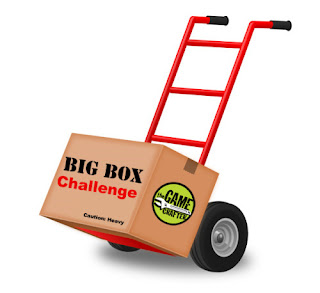 If you start diving into the scoring sheet, you’ll notice that Alex gave FAZA a total score of 42 out of 45. This score is then broken down into three categories: Rules/Mechanics (18 out of 20), Art/Style (15 out of 15), Marketing/Hype (9 out of 10). He then highlights some of the qualities that stood out to him:

“Great cooperative premise and graphics. Like how the play area is laid out, though looks like there’s room for improvement in hierarchy of information. Really glad there’s considerations for ‘if this is your first time playing.’ Rules are super well documented and the examples are helpful. Thrilled to see info for both ‘here’s what to do on your first game’ and ‘here’s how to make the game harder.’ Also nice touch with the considerations made for color blindness.”